Booklist "Celebrity series are not only omnipresent, they’re largely interchangeable. What gives these titles in the What It’s Like to Be / Qué se siente al ser . . . series a larger reach is the bilingual focus. Each layout carves out spaces for both English and Spanish, and though the asymmetrical placement isn’t especially conducive to word-to-word comparison, it is nonetheless a sturdy translation that will be appreciated by bilingual learners. The expected puffery pairs fairly dense blocks of cheery text with both staged publicity shots and grainier candids. The layout is simple but effective, with insets spotlighting secondary characters as well as oversized arrows clarifying group shots. America Ferrera follows the Ugly Betty star as she walks red carpets, signs autographs, and presents awards. Marta Vieira describes the four-time FIFA World Player of the Year as she performs admirably on and off the soccer field. Shakira makes vague references to the singer’s altruism (“she tries to keep the ticket prices low”) while keeping things frisky with shots of her famous midriff. Sonia Sotomayor is a standout, not only for well-chosen candids (she’s almost unrecognizable chilling at a ballpark) but for a plethora of weird facts (“She enjoys eating pig intestines”). No source notes here, but a list of further reading will aid report writers in these titles good for entry-level celebrity worship."
--Booklist October 15, 2010 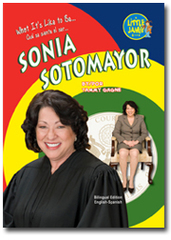 In 2009, Sonia Sotomayor made history when she became the first Hispanic justice of the U.S. Supreme Court. This wasnt the first time she beat the odds against her, though. Growing up in a one-parent household in the Bronx, New York, she aspired to be a lawyer. Encouraged by her mother, she achieved this goal and so much more. Although many people view Justice Sotomayor as an inspiration, she sees herself a little differently. She says she is just a kid from the Bronx. Because of her many achievements despite her humble spirit, many people wonderwhats it like to be Sonia Sotomayor?