School Library Journal Gr 4-6-Bright and appealing layouts will draw readers to these overviews of American constitutional history and government. Each book describes the historical background of its subject and traces its evolution as the country and government grew and changed. The authors don't attempt to cover all aspects of the Constitution and government. Rather, they use interesting and often timely examples about historical and current issues to show readers how the federal government operates, examining the interactions between the branches of government and those of the federal government and the states. Large, colorful reproductions and photos depicting leaders and relevant topics will draw students. (c) Copyright 2011. Library Journals LLC, a wholly owned subsidiary of Media Source, Inc. No redistribution permitted. Booklist Booklist (June 1, 2012 (Vol. 108, No. 19)) Grades 3-6. The My Guide to the Constitution series offers a solid look at some of the most important events surrounding the country’s beginnings. With states’ rights so prominent in the news, The Power of the States is a necessary title for libraries. The book explains the powers of the national government vis-a-vis those of the states and discusses how this tension has sometimes burst into warfare, as in the case of the Civil War. Though necessarily some of the information overlaps, each title offers something important for readers to think about and discuss. The artwork, historical paintings, and photographs are for the most part well chosen. Overall, this is a good, ground-level place to get kids talking about government and what it means to their lives. Library Media Connection Library Media Connection (January/February 2012) Each of these titles begins with an introductory historical perspective, full color historical and contemporary photos, diagrams, charts, and graphs. Sidebars offer little known tidbits about the Constitution, government, and people involved. Since each title has been written by a different author, there is variance in presentation, in quality of writing, and some repetition. Most titles are carefully apolitical. The strength of the series is its currency: mention is made of immigration, health care, gay marriage, and racial profiling. Another strength is the inclusion of the text of the Constitution and Amendments, followed by explanations using examples that have relevance for the reader. Libraries would benefit by replacing their old government books with these titles. Bibliography. Glossary. Websites. Index. Marion Mueller, Library Media Specialist/Consultant, New Hope Christian School, Neenah, Wisconsin, Rawhide Starr Academy, New London, Wisconsin [Editor's Note: Also available in paperback.] RECOMMENDED 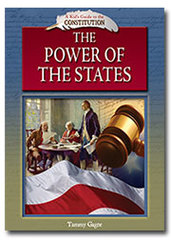 The Power of the States (Softcover)

The U.S. Constitution is more than 200 years old, yet the rights it grants the citizens of the United States are exercised every day. Without the Constitution, Americans could not speak out for the causes they hold most dear. Newspapers could not publish the stories that keep people informed about events in the United States and around the world. Just as important, Americans would not have representatives in Congress or the White Housepeople for whom they vote in democratic elections. But what rights do the individual states have under the Constitution? This book explores those rights, how the Supreme Court has interpreted them over the last two centuries, and how they continue to affect the lives of people in every state in the Union.