Review “My Guide to the Constitution” is an educational series ideal for students in grade school and junior high. Each volume examines a different aspect of the United States- how it came to be created, the human rights it was meant to protect, and the major roles and duties of the three branches of America’s government. Written in plain terms and illustrated with full color photography on every page, My Guide to the Constitution lives up to its title and is an excellent resource worthy of the highest recommendation for school library collections. The individual volumes are Amie Jane Leavitt’s “The Bill of Rights” (9781584159476), Bonnie Hinman’s “The Executive Branch” (9781584159438), Pete DiPrimio’s “The Judicial Branch” (9781584159445), Rebecca Thatcher Murcia’s “The Legislative Branch” (9781584159421), Tammy Gagne’s “The Power of the States” (9781584159452), and Tamra Orr’s “The Story of the Constitution” (9781584159469).”
--Children’s Bookwatch, April 2012 School Library Journal “Bright and appealing layouts will draw readers to these overviews of American constitutional history and government. Each book describes the historical background of its subject and traces its evolution as the country and government grew and changed. The authors don’t attempt to cover all aspects of the Constitution and government. Rather, they use interesting and often timely examples about historical and current issues to show readers how the federal government operates, examining the interactions between the branches of government and those of the federal government and the states. Large, colorful reproductions and photos depicting leaders and relevant topics will draw students.”
--School Library Journal, November 2011 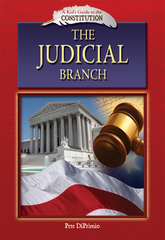 The president and Congress govern the United States, but who keeps them in check? As the highest court in the land, the U.S. Supreme Court is head of the judicial branch, the third arm in the federal government. When President Harry Truman wanted to show the U.S. steel industry who was boss in 1952, the Supreme Court showed him that no one is above the law. Credit the Courts strong stance to John Marshall, the most influential of the early chief justices. He cemented the idea that the judicial branch must be equal to the executive and legislative branches of the federal government. How did he do it and how does the Supreme Court affect our lives? Find out what the Constitution says, and what it doesnt say, about the U.S. court system.