Booklist “This slim volume in the Evolution of Government and Politics series addresses political, social, and military aspects of the tenuous relationship that exists between North and South Korea. In large blocks of text intercut with occasional photos and inset boxes, the coverage begins with the creation of the two states in 1948 and includes events current through 2014. Very little information about North and South Korea prior to the twentieth century is included. Each country’s evolving politics and governmental structure are covered in alternating chapters, a format that usefully invites comparisons. The two nations’ mutual animosity and competitiveness are clearly delineated. Full-color archival illustrations appear throughout, though same are placed next to unrelated text, which can be confusing. Other features include a map, glossary, and time line. Numerous further reading suggestions (Some at an adult level and extensive chapter notes are also provided.”
--Kathleen McBroom, Booklist, Fall 2014 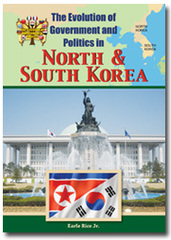 This volume in the Evolution of Government and Politics series addresses political, social, and military aspects of the tenuous relationship that exists between North and South Korea.