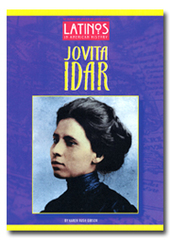 Jovita Idar was a journalist, teacher, civil rights activist, and nurse in Laredo, Texas, in the early part of the twentieth century. She opened free kindergartens for Hispanic children when the public schools only admitted Anglos. But she was not happy teaching poor, starving children in schools that were not equal to those of her Anglo counterparts. So, she quit her teaching job and she spoke out against these atrocities as a writer and editor for several Texas newspapers. Jovita and a friend created La Cruz Blanca, or the White Cross, which they modeled after the Red Cross, to help the wounded during the Mexican Revolution. An important figure in Women s Studies today, this is the first time Jovita Idar has been featured in a story for middle grade readers.