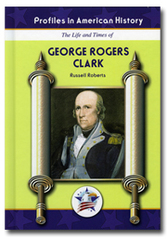 Many people do not realize that there were two theaters of warfare during the American Revolution. One was in the east, with George Washington and his Continental Army. The other was in the west, with George Rogers Clark and his spirited volunteers trying to hold off the British and their Native American allies.

The story of George Rogers Clark is one of courage, bravery, and daring in the face of overwhelming odds. Often finding himself in what appeared to be a hopeless situation, Clark used skill and ingenuity to improvise his way to repeated victories. He was the fabled Long Knife, known far and wide not only for his brutality but also for his honesty and bravery. His victories played a key part in helping America win the War of Independence.