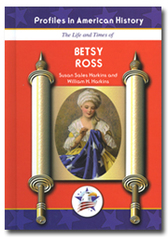 Betsy Ross is one of Americas most endearing and beloved characters. Widowed and alone, early in the Revolutionary War, Betsy was approached by three great men. They knew she was a Patriot and a good seamstress. Would she sew Americas first flag for them? Fighting heartbreak, loneliness, and poverty, she accepted the challenge willingly. She couldnt fight for independence, but she could certainly sew for it!

Tradition tells us that Betsy agreed to make the flag. First she pieced together the red and white stripes. Then she appliqud thirteen five-point starsone for each colonyonto a field of dark blue. But did Betsy Ross really sew Americas first Stars and Stripes flag? It wasnt until 1870 that her grandson William Canby told Betsys story to the Historical Society of Pennsylvaniaand the rest is history, so to speak. Americans dont seem to mind that the story cant be proven. They love Betsy Ross and they love her flagwhether she really sewed it or not!